Made a gameplay vid for Big Building Boom Blues, check it here:


I am not working on games much right now, lots of stuff to do: college stuff, pixel art jobs to finish...

As far as games go, Super Banana Nababa, a game project I started to participate in since early october was submitted to the IGF on November 1st. I worked on that a lot during october,but not so much since after it was sent so far this month. The game isn't complete but what's there is awesome. Its a little less than halfway done maybe?

Sluggy's other adventures is advancing very slowly, mostly because its not very high in my current priorities, but also because I'm thinking of changing a lot about it, so much it could become barely recognizable from the demo I put here a few weeks back (check older blog post).
I'm thinking about putting together many of the various game projects I started from Sluggy as a base into one big game somehow. The code from these various different games is very easy to put together as it had the same origin. Thinking of doing something weird, like two parallel games that are played simultaneously, one that is exploration-based with a large persistent world and the other with a simple linear level structure. I'm trying to build around that idea, it could be fun but it'd take a long time and I prolly wont really work on it until SBN is all done.
Publié par FrankieSmileShow à l'adresse Thursday, November 13, 2008 2 comments:

New release of Sluggy's other adventure

yaya! Heres a new release.
GET IT HERE!!

Its not visually very different, but instead the level succession now works differently: you play through all 20 levels now, none of them are secret anymore. Secret exits now lead to the spaceship mini game, and the bonus tokens that lead you there before have been replaced with extra life pickups. Finally,I corrected quite a few problems and bugs, such as the game never ending and your inability to quit playing by other means than CTRL ALT DEL. None of the new sprites I made are implemented yet, but the game is better organized now.

Right now I am helping out Bisse, Im9today and Phlogistion with Super Banana Nababa, which we have to finish before the end of the month, so I wont be working much on Sluggy in october. Also someone paid me for some pixel art and expects it for next week, so yeah.

What is next for sluggy, in a loose order of priority:

I am going to start a video montage of some of the game's current gameplay tonight, ill put it up on my youtube channel when its done (and add a link to it here naturally). For now, play the game! Also, feedback is welcome!

Made a lil gameplay video of The Sad, Sad tale of Finnsworth, private eye in space on youtube. I encourage anyone who played the game to make one of their own...


I wonder if someone out there has the skills to play through the whole game...
Do you...?

Drew another pic today, fun fun fun
It looks like a monster I drew for a mobile game a while ago and also looks a lot like a boss I made for Sluggys' adventures. The boss is functionnal and pretty hard, its the kind that jumps around and belches lazer and whatnot. Its pretty hard. I didn't make it for that game originally though, so ill have to change its code around a bit for it to work with the different physics in Sluggy.

the pic on deviantArt:

Weeeee by ~FrankieSmileShow on deviantART

Recently made a digital painting, here it is on deviantart:

Tar Monster by ~FrankieSmileShow on deviantART

A video of me drawing it:

Its a boss idea for Sluggy's adventures, basically. He propels himself around by shooting tar-ish stuff. The tar doesnt damage you but pushes you back. As the fight goes on, tar is building up in the bottom of the stage, and its too thick to swim in, so its as if the ground slowly grew higher or something. Its still at the idea stage though, I'm not sure about how itll work yet.
Publié par FrankieSmileShow à l'adresse Sunday, September 28, 2008 1 comment:

New animation for that guy, a walk cycle.
Did that during a programming course last Friday (Sorry programming teacher you are not reading this are you? Of course you aren't!)
Publié par FrankieSmileShow à l'adresse Sunday, September 21, 2008 1 comment:

Another small update, that's the basic sprite of a boss for Sluggy's Adventures. I like him.... hes gonna be a pretty dynamic boss, the kind that runs around, jumps and shoots.

New version of the snail now with walking and death animation. thats the large snail, there will be a more common, tiny version of them too.

It might not look large here, but the games' native resolution is 320X240, and the pixels will be tripled so the final game display is 960X720, making that snail actually three times larger really.
Publié par FrankieSmileShow à l'adresse Monday, September 15, 2008 1 comment:

Picking an old project back up....

I recently decided to finish up a pretty old project of mine that I never really finished, Sluggys' other adventure.

Its basically a platformer game, sequel to my very first games made with game maker (my first games ever pretty much, and the projects that got me started with pixel art), Sluggy's adventure 1 and 2, both made around 2005.
Ive no idea if those two early games can still be found anywhere. They were very buggy and ugly, but quite a bit of people played em.

Last year I started to work on this new one, "Sluggy's other adventure". It was more or less just an excuse to draw more pixel art and show off how my art developed over time. The game went along well and I designed quite a bit of levels, they were full of secrets and were pretty fun, but then I sort of stopped working on the project, not really knowing what to add next. My main problem was that I didn't know how to tie the levels together. I thought of a world map, but couldn't come up with a good visual concept for it, or design a nice layout. Before giving up on the project entirely, I quickly put together a playable demo of it, without any world map, just levels that follow each other.

DOWNLOAD
It had a few bugs, but has quite a bit of levels to play, and lots of secret levels too (there is about 20 levels in all, but a single game will get you through only 6 or 7 of them at a time, look for the secret red exits).
Also the game ends abruptly one level after the boss. To quit the game at this point you will have to do CTRL ALT DEL I'm effraid. Also the game was made with an older version of game maker, so it will not work on windows vista.

Now, very recently I decided to wrap that game up. I'll rearrange and edit the levels, draw new visuals for the game to match my current art style and skill, and overall make it better. It should be about a week of work. I will also try to tie the levels together in a fun way, maybe a world map or something, to give the player a better sense of advancement. Here are two new enemy sprites I drew today, next to their old counterparts. 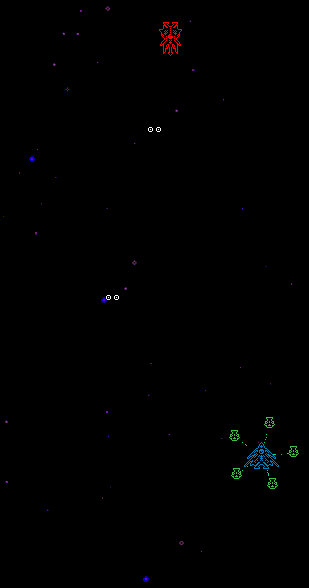 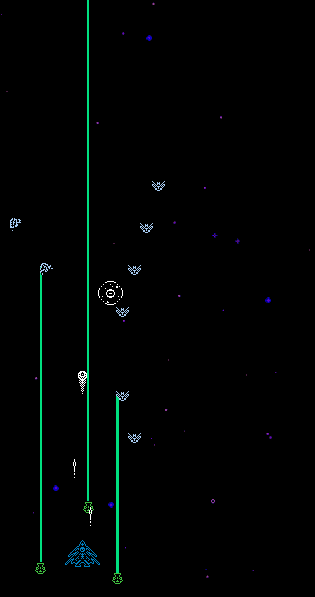 DOWNLOAD
Game project im working on with Souly from Pixeljoint. He was working on this with another dude who designed and programmed, who then abandoned the project. Souly's roommate I think made the background music.
I didn't have his source code but loosely used his technical demo for the overall idea. Right now the game never ends so you might want to hit ESCAPE to quit after a while. the S key shoots, and the arrow keys move. Things spin around you while you are not shooting to serve as a shield, and when you are shooting, they stop and shoot lasers. A few of the later enemies don't do anything yet and just go down and take lots of hits. The last enemy that does anything is the one that shoots lots of rockets, so after that point you can just quit playing. For this test, the ENTER key spawns more pods around you because I didn't program any way to gain new pods yet (and I'm not sure how that will work really yet) 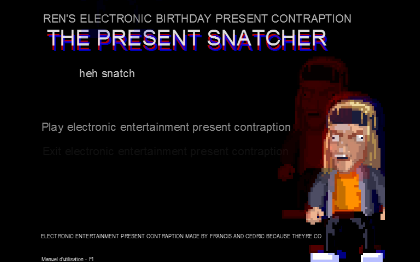 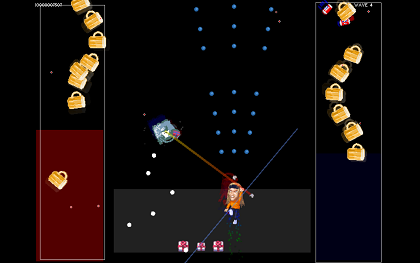 DOWNLOAD
Heres how it works: in the middle of the screen there is a large gray meter going up in the background. This meter represents your life, and it goes up every time you shoot an enemy, and goes up by itself as well, slowly. The life is also a currency of sorts, because by going on the sides of the screen, you "spend" these points in two types of "upgrades" for your ship. On the right, you make your shot stronger. On the left, you buy cat heads that float around the protagonist and defend you in different ways (the first one is a rotating short range, weak laser for instance). Letting the middle meter fill up gives you an extra life, represented by the presents on the bottom of the screen.

That's a game Lurdiak and me made for a common friends' birthday. I programmed and made a few of the enemy sprites, and Lurdiak made the awesome soundtrack and some other enemy sprites. The game never ends right now, but there is new stuff in each of the 6 or so first waves. Me and Lurdiak will eventually work some more on this, maybe toning the birthday theme down a little and making it a more regular shooter in theme.
Publié par FrankieSmileShow à l'adresse Saturday, September 13, 2008 No comments:

I update again! Egad! Heres a few things I've been working on lately:

The two following games were made in around 3 hours each, in teams of 2 or 3, for the 3X3 poppenkast competition. At the time of the writing of this blog entry, these two are the only entries in the friendly competition...

THE SAD, SAD TALE OF FINSWORTH, PRIVATE EYE IN SPACE

DOWNLOAD
The goal of the game is to survive against hordes of space monsters using finnsworth's great chain laser weapon. Survive for approximately two minutes for a....surprise....
I worked on the visuals, and my buddies MonsterKingRen and Lurdiak made the programming and sound respectively. The games' visuals are all in 4 colors: white, teal, red and black.

The game is neat and sure was fun to work on. The only problem is that its too long and takes a while before it becomes any challenging, and then suddenly becomes ridiculously hard. Im sure you guys will have plenty o' fun with it though! 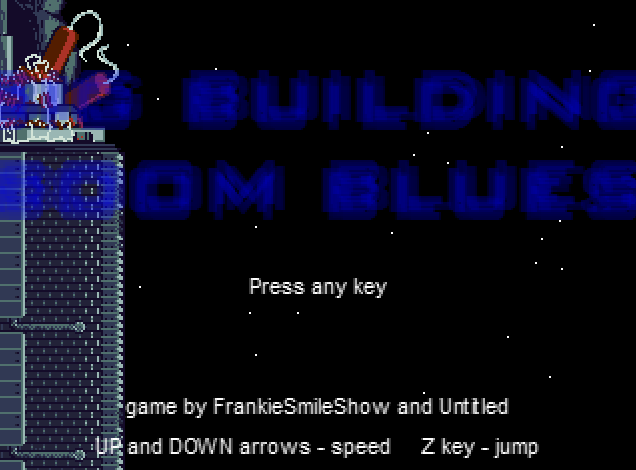 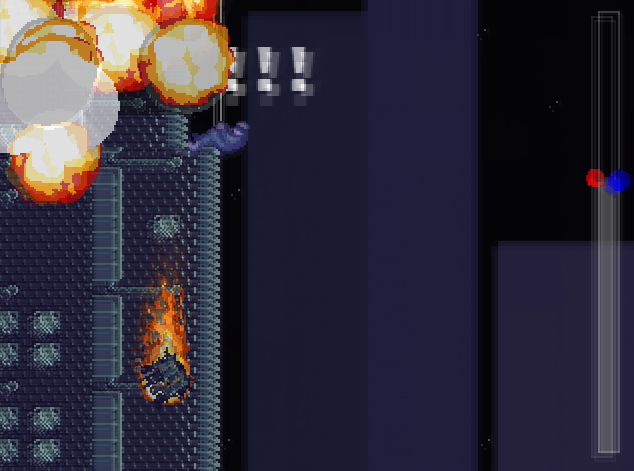 DOWNLOAD
You, a sort of NINJA, rigged an abominable-looking building with explosives, and must repel down its side before the explosion catches up on you and kills you. Arrow keys move, the A key jumps. Time your jumps right to jump higher. There are two versions in the ZIP. A normal version which was made in 3 hours, and a Xtra version that I added stuff to, to make the game more interesting and control the difficulty somewhat.
I programmed it and made most visuals on that one, and Untitled made the games' wonderful soundtrack, as well as the skyscrapers' tiles.
Publié par FrankieSmileShow à l'adresse Friday, September 12, 2008 1 comment: