Long time no see. Again.
College taking up some space now, with big projects in every other course, but I still have time to work on some of my own stuff on weekends. Here's the latest new shit:


In that video I first draw the thing and then animate it, its the first time I recorded my animation process....
Thats a flying hippocampus-shrimp-dragonfly monster, fully animated. Its for a new game project of mine where I'll try using all of the unused ressources I made for past projects. Basically its an exploration-oriented platformer, like metroid or castlevania, with a visual style that seems to be somewhere between the NES and SNES, though without really following the restrictions of neither.

Heres a video of an explosion, its for the same project:

Basically, the games' story is that two aliens crash on a strange unknown planet and have to find a way to either repair their ship or find some replacement. The game's main idea is to give it many endings that change how long you spend on the planet, and that the longer you spend on the planet, the stranger and creepier the game gets. For instance, if you finish the game with its earliest ending, the story will have just been about two aliens crashing on a planet and then leaving. Nothing strange, nothing weird, they just come and go. But if you stay just a bit longer, as you gain access to deeper parts of the maze, enemies get more freaky, the game gets a eerier atmosphere and the story unfolds slowly into something pretty ghoulish.

The game also has a few gimmicks I'm working on building up into decent gameplay mechanics: the games' maze is split into many areas with their own visual characteristics and atmospheres, and each of these areas are in a power circuit, and placing power cells in an area powers it up, which significantly changes it around, like doors open, machines turn on, lights turn on, some monsters disappear or change their behavior, some new monsters pop up. So it gives areas two very different perspectives: Areas that are powered down are dangerous and creepy: Your vision range is more limited in them, weapon recharge and healing stations do not work and enemies use the dark to their advantage, staying out of your vision range and suddenly swooping in. Powered-up areas are more combat-oriented: weapon recharge stations work, enemies are all visible and attack on sight.

I'm doing a lot of work on that project, and more importantly I wrote a design document for it instead of just making up shit as I go along. I always stayed away from that approach before, thinking it wasn't really useful to spend hours and hours on a design doc if the project is a lone wolf project anyways. I thought design docs were only useful to make sure all team members always have a clear idea of what the project is as a whole and can just refer to it when they have questions instead of asking the game's designer. But now that I made one, I see even a lone wolf will benefit a lot from that kind of planning.

First, it sets the project in stone psychologically: its written down, its all done, it separates the design and the integration processes clearly, so you don't end up adding new features or changing ideas while you are actually making the thing, and it makes sure that before you even begin programming anything, you already have a clear idea of what you will need later, you know exactly all of the features you will need to implement on the player characters' object for instance.
It also makes a schedule, and you no longer have these "okaaay... whats next now, where the hell was I?" moments, even after a long break from working on the project.

Does it mean I'll ever finish this game? Id like to think YES but heh you know what its like amirite! Well I've been on this one for months now and I still have interest in it, that's probably a good sign. I asked two great chiptune artists for help on the game's music, Untitled and Phlogiston.

And now for something completely different, here's a picture I drew for my colleges' student newspaper, the front cover: 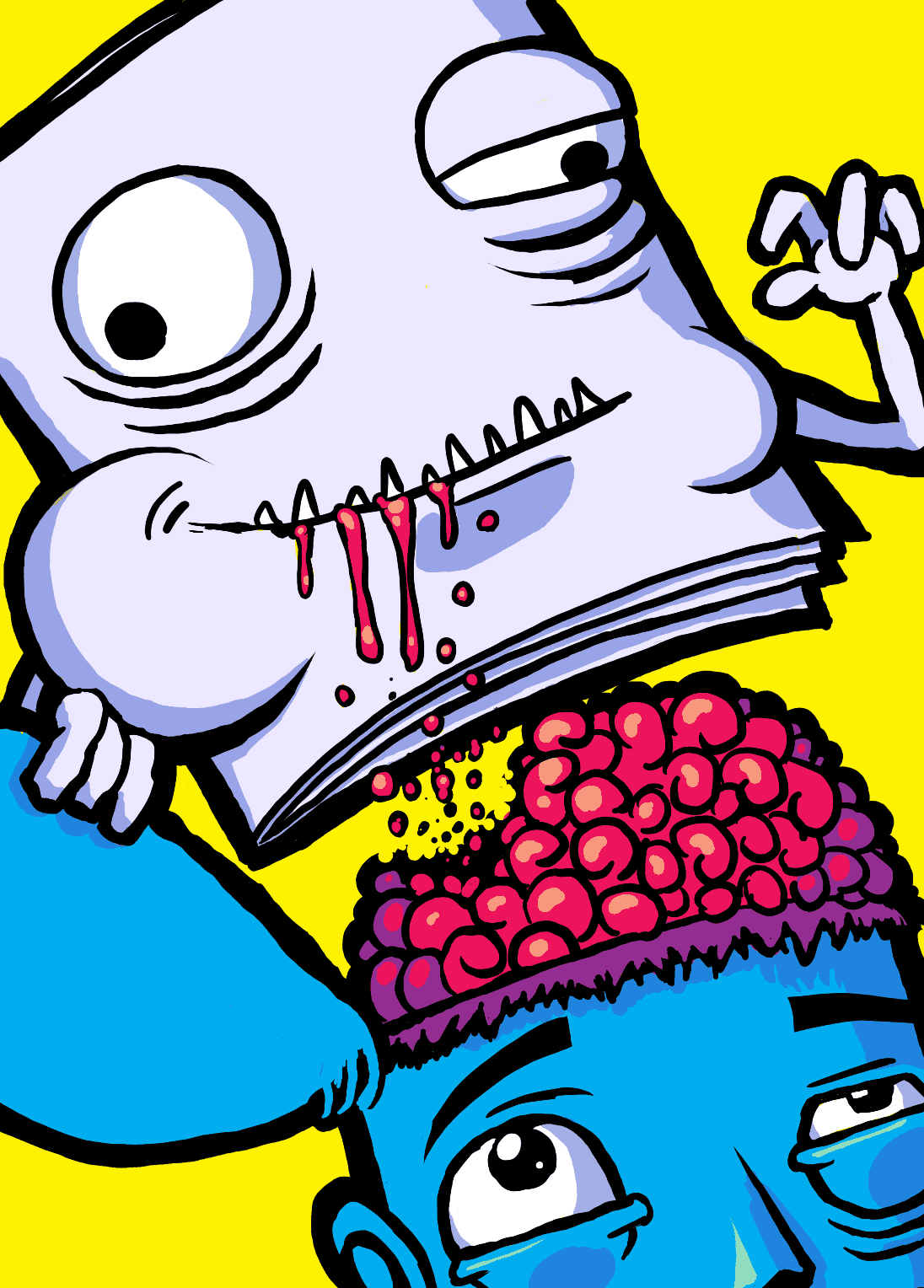 I might or might not make another update soon, with like more game art or sketches or who knows maybe DUCKS
Publié par FrankieSmileShow à l'adresse Friday, February 06, 2009 2 comments: