Participated in the Global Game Jam this weekend. It was quite an experience. The game we were working on was RoVo

(the splash image was made by Josse Laurendeau Piron, he did a lot of amazing illustrations for the game)

The idea was pretty cool: An RTS where you control a bunch of Robots and try to survive in a post apocalyptic wasteland. You upgrade them by modifying a large factory that produces them. As new robots start coming out of the factory, the past generations of your robot slowly go insane as they realize theyre obsolete, and turn on you, repopulating the battlefield with ever-stronger robots to make your life difficult. A good way to play is to engineer weaknesses in your robots so you can easily dispose of them when they turn on you.

Buuut yeah... in the end we just had a generic RTS engine working. The game was all 3d with lots of cool stuff working, some neat pathfinding... but the final game had no combat, no robot upgrading, so not much from the actual concept. What we did end up with was however very impressive, everyone did an amazing job, the game was just too much for the time we had.

Im pretty happy with the things I made for it though. Here are some of them: 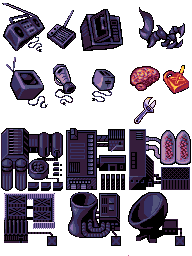 Heres the game's page at the global game jam website